Here is Why Your Telemedicine App isn’t Getting Users 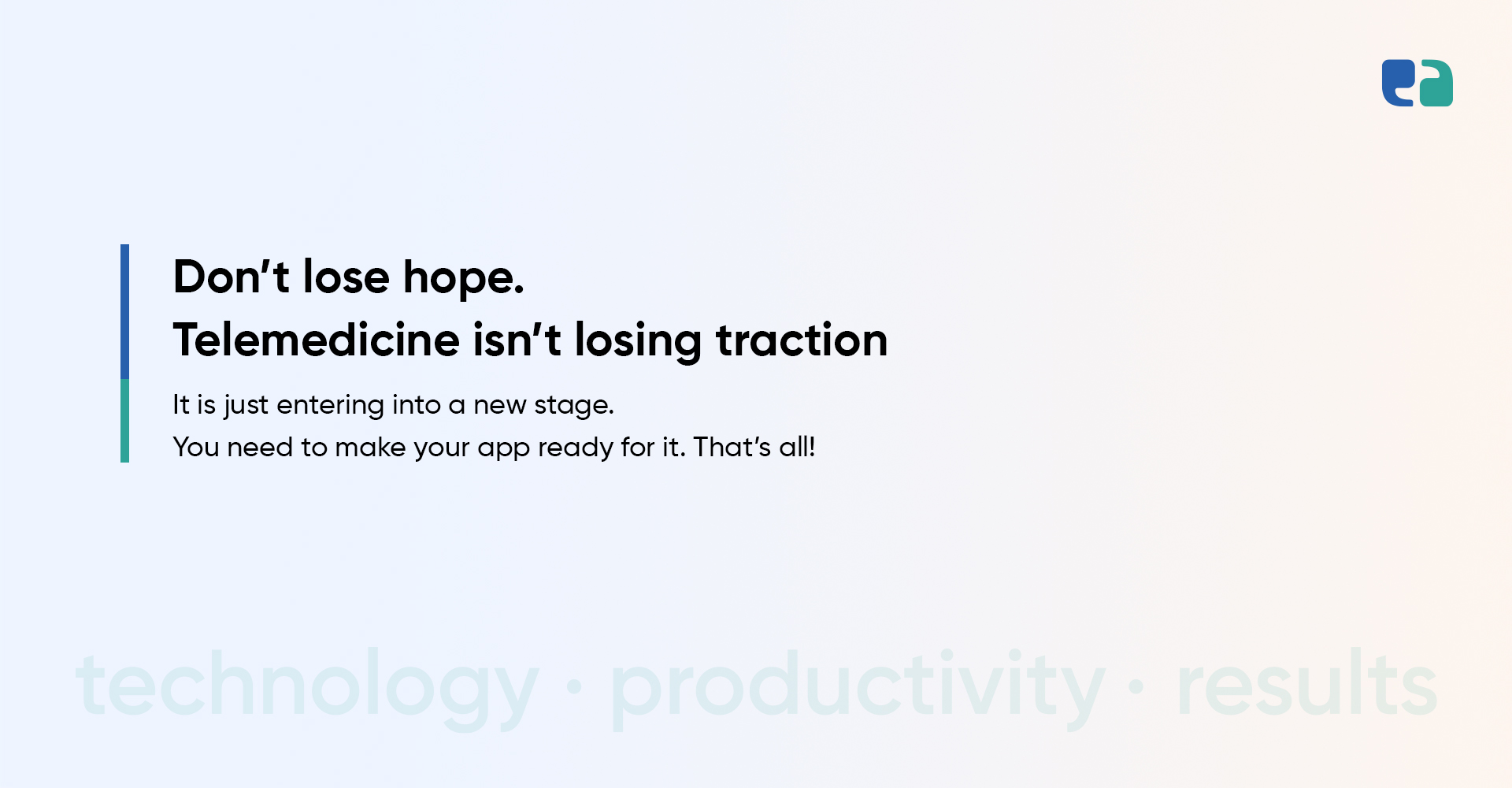 Let’s not talk about what already happened. But let’s focus on what you can do next.

You can get thousands of users on your telemedicine app if you reconsider the following points and work on them.

(In case you’re wondering who are we to tell you how to get telemedicine users, let us tell you, we have been dealing with telemedicine tech & business even prior to the pandemic.

And during the pandemic, we built and launched a white-label telemedicine solution that has successfully benefited 30+ healthcare providers and startups across North America.)

Finally decoded! Your telemedicine app isn’t getting users because of these reasons

For patient outcomes equivalent to an in-person visit, the telemedicine app must work according to clinical workflows of appointment booking, referral, billing, follow-up etc.

For example, appointment booking workflows for new users, existing users and for follow-up visits must be different.

The challenge here is to optimize clinical workflows with regard to the online nature of care. Because workflows that are working perfectly fine in in-person care may not be suitable in the same form for virtual care.

Users using telemedicine apps have different user persona. To target the exact user persona and influence their thoughts and interests, the app theme must be defined scientifically, considering how patients facing healthcare and wellness issues react to different colours.

The excellent purpose of a nice UI/UX is driving user journeys forward while making sure that users are able to reach the endpoint of each user journey in minimum time.

For example, signing up with Google and Apple is a much shorter user onboarding journey than entering email and password details manually.

Where designers struggle the most is placing the right buttons at the right place which all together make a feature.

If any of the buttons that together make a feature are placed wrong, users struggle to utilize it and end up getting annoyed interacting with that feature.

For example, on the payment page, you must put the ‘Payment’ button at the bottom of the center, rather than putting it in any top-most corner.

App navigation is the most underrated part of UI/UX. People think it is just the transition effect between two screens. However, the reality is that app navigation drives the user journey and keeps users engaged while they are moving from one app page to another.

The art of visual hierarchy demands you to see each app’s screen from the perspective of users and their real-life scenarios. Visual hierarchy generally deals with how easily you can gain the attention of users on each screen.

If UI elements aren’t placed well, users cannot identify what each screen is all about because each screen serves the purpose and users don’t know about it.

The following example will help you understand more. 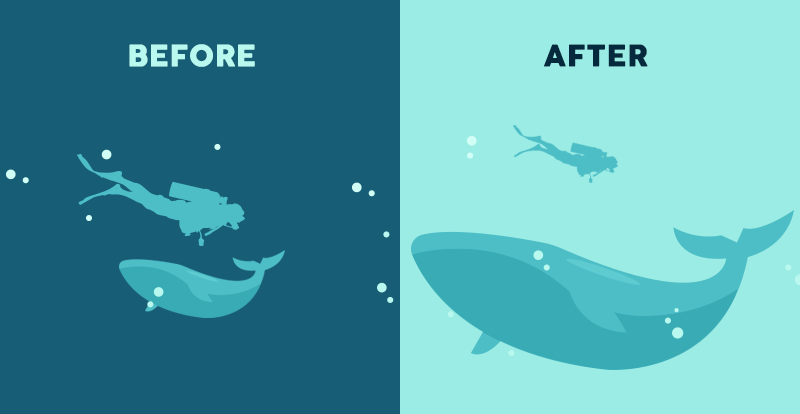 Imagine you fill-up the form by spending your crucial 3 minutes and when you click on the submit button, the app shows you an error message. Or in a worst-case scenario, app neither submits the form nor shows you any error message. This is called a functional bug!

Poor app performance costs brands more than their reputations. Users generally don’t prefer to stay on the app if it takes more than 3 seconds to respond.

The worse you can do with your mobile app is make it live with unattended hidden bugs which you’ve never come across.

It is like launching a titanic into the sea with a hole in the ship’s hull! It will surely sink!

The basic nature of a mobile app is that it does not work the same way on all devices. What makes device compatibility issues even more common nowadays is the inception of different screen sizes.

Users have developed awareness around data privacy and security. Thus, to win their trust, you must eliminate all vulnerabilities and achieve the status of the compliant app!

Over the period, new privacy and security issues emerge as the app is regularly maintained and upgraded. To ensure there are no newly emerged vulnerabilities, you must carry out a compliance audit annually and share the report with the users too to easily win trust.

While choosing 3rd party APIs, don’t fall into the trap. Affordable APIs might not be secure and many times infect the entire app. Also, not all APIs deliver the same functionality you are looking for. So, reconsider the API you are using in your telemedicine app.

For example, you must use Twilio or some similar communication API for telemedicine video calls, voice calls and chat.

There must be a compliance strategy at a place that facilitates you to gain clarity of where you are lacking, what to do in any incident and what you have achieved so far in terms of compliance. Because you can make users believe in your app’s privacy and security when you have ultimate awareness of every compliance thing involved in your app.

For example, if you don’t have a post-breach strategy on the table, how would you assure the users that their data is safe even after a data breach?

A feature set is something that does not only affect the overall budget but also the user experience and your market position. An ideal feature set has the perfect balance of common features, advanced features and good-to-have features.

In the case of telemedicine apps, appointment booking is a basic feature, remote patient monitoring is an advanced feature and weight tracker is a good-to-have feature.

Many times to just extend the feature set with the hope that it will help you gain a competitive edge, you end up adding those features which do not serve any purpose.

You should avoid this practice as it increases your cost unnecessarily and confuses the users with lots of useless features.

There is cutthroat competition in the telemedicine app market. The tested way you can gain the competitive edge and easily dominate the market is by adding advanced features that people not only find useful but futuristic while using it.

A west coast-based healthcare provider turned into an entrepreneur developed and launched the MVP version of the telemedicine app last year.

Even after making it a full-fledged app, the app wasn’t performing well. It was surprising for him as he researched well and the market was also in his favour.

But when we assessed why his telemedicine app wasn’t getting enough users, we found several QA, workflows, UI/UX and compliance issues that he wasn’t aware of.

To solve all issues, we later provided him with developers, designers, QA engineers, business analysts and compliance specialists.

And since his app idea was impactful and visionary, we invested as well. So, this way he managed to build a 2.0 version of his app without spending anything.

As of now, his app is one of the most successful telemedicine apps in his region with profitable app modules like healthcare eCommerce, online pharmacy and remote patient monitoring integrated with the virtual care delivery model. 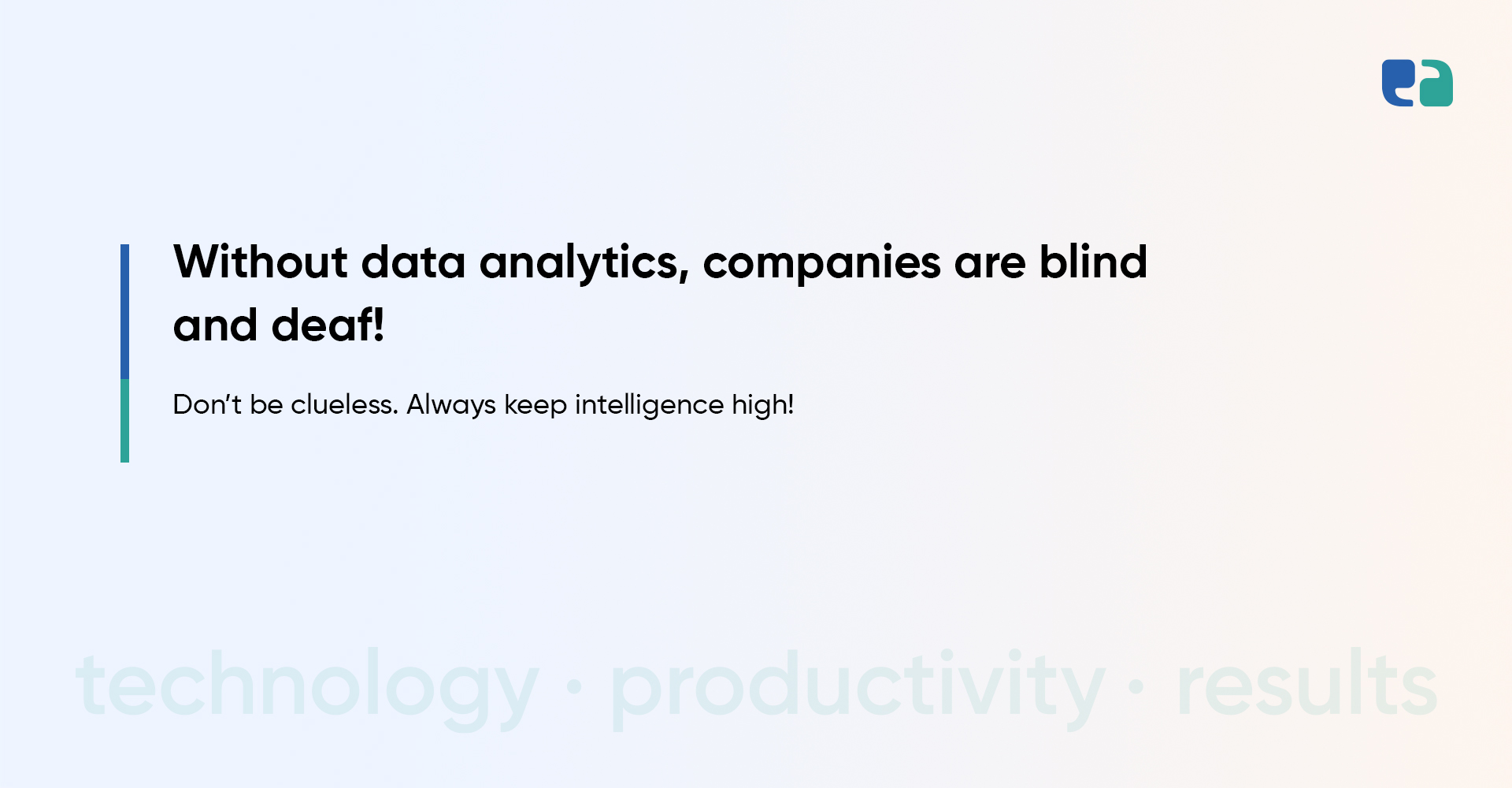 No One Tells You What Cooks Behind the Doors of Healthcare Data Analytics Agencies. But We Do!
Consulting
20 May 2022 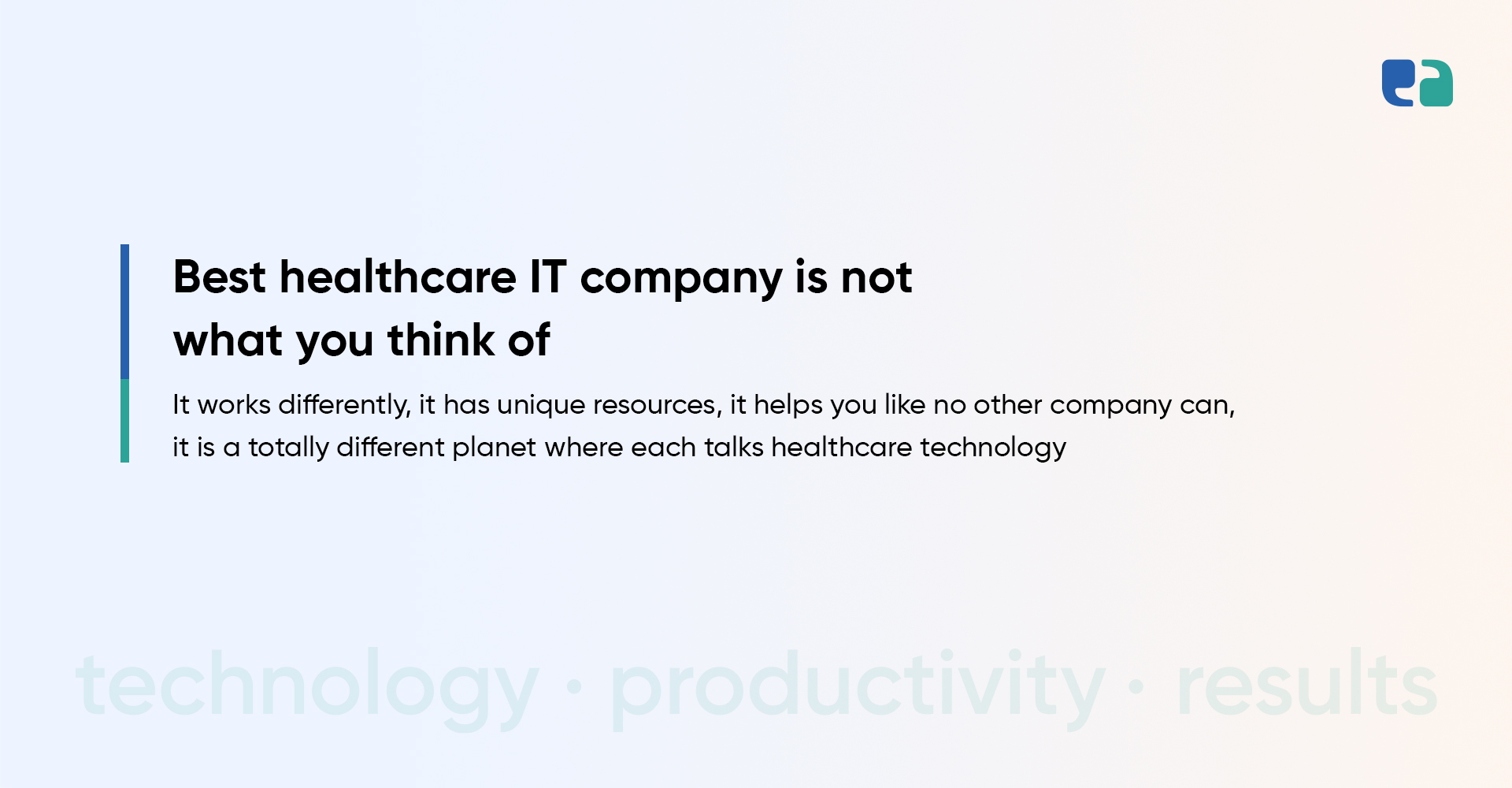 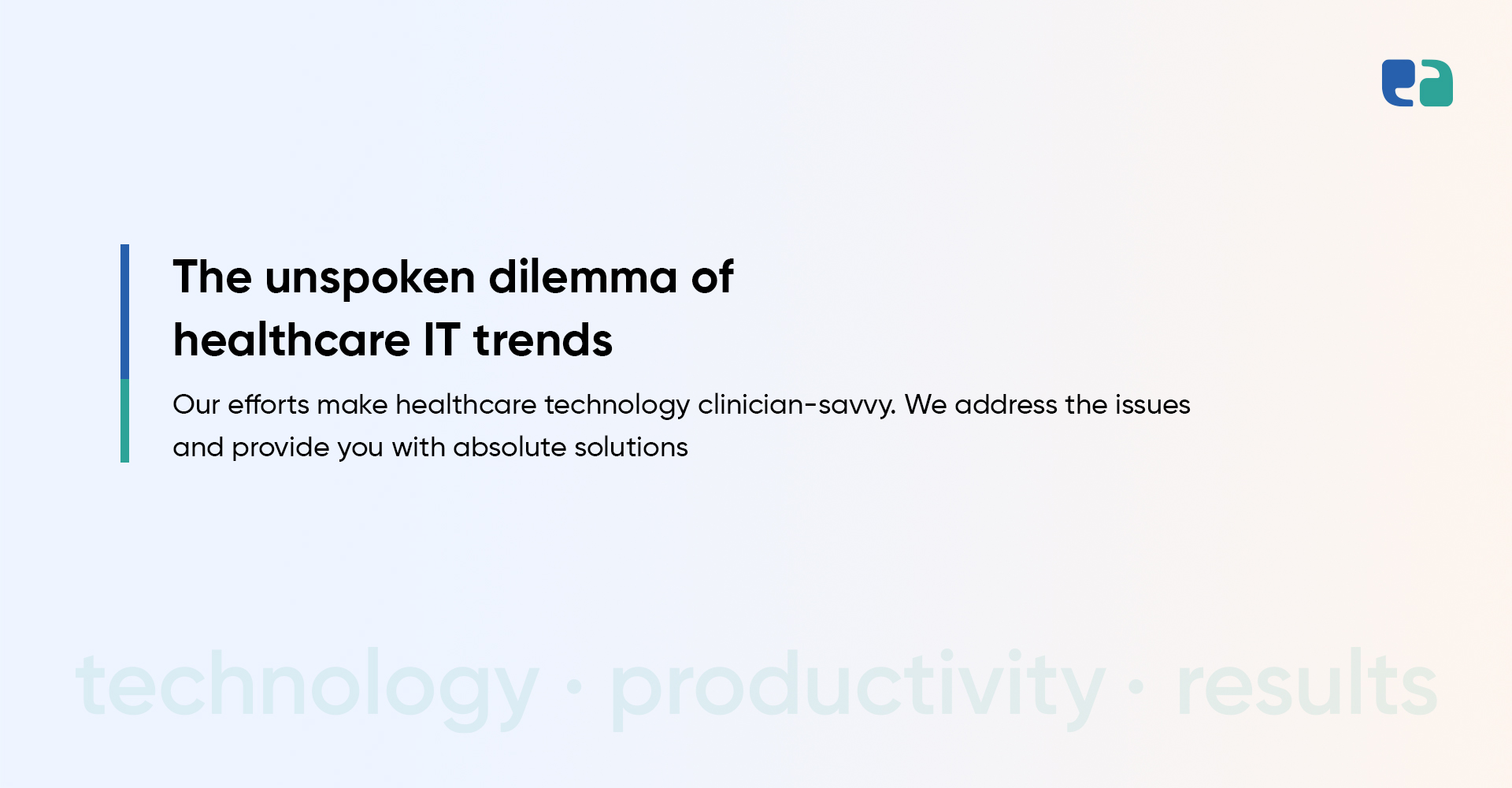