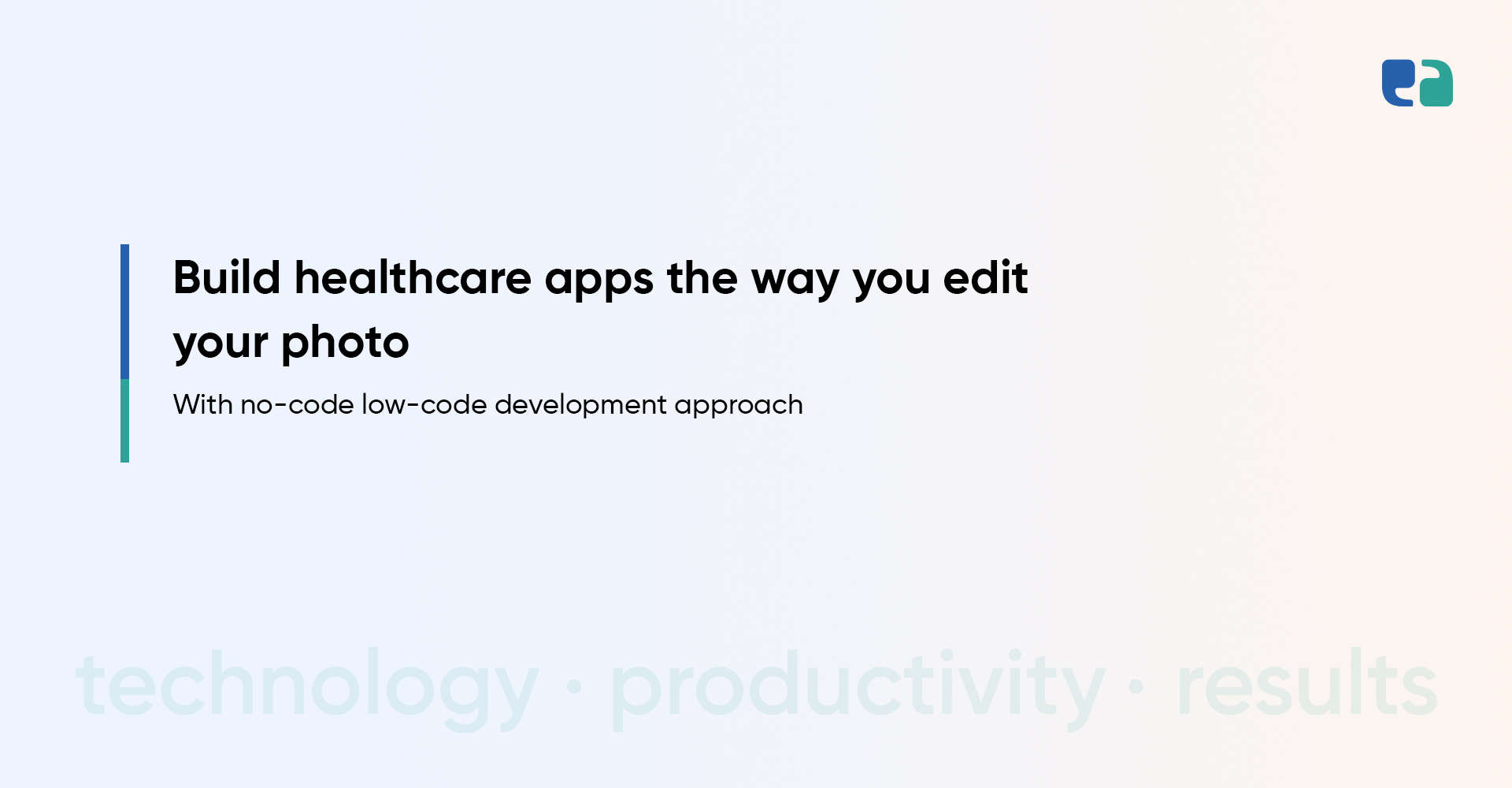 Everyone should care about it.

But if you are healthcare professionals, healthcare entrepreneurs or in any way dealing with the healthcare industry, you must care about it.

Because it has the potential to empower you with a healthcare mobile solution you have been delaying due to high cost, tech complexities and maintenance costs.

Building healthcare app solutions with low code/no-code platforms is a kid’s play – if you have basic knowledge of workflows, APIs, UI/UX and other common integrations.

But most importantly, it costs very little compared to the custom app development and the time-to-market also gets reduced by at least 50%.

First of all, both are different things. However, they fall under the same category of the visual and codeless development approach.

The conventional app development practice has a major limitation. To achieve any functionality in the app, developers need to write the code for it.

So, to eliminate such a limitation and help developers to achieve app functionality without writing any code or writing only a few lines of the code, the concept of low-code and no-code development has emerged.

In detail, when a developer is following the low-code no-code development approach, he is able to build a healthcare mobile app by drag and drop option and writing zero or fewer lines of code, utilizing any low-code no-code platform.

However, there are some advanced platforms available that allow you to build both low-code and no-code apps from the same platform.

These platforms are nothing but the tech infrastructure in the form of a web app where you create your app project, drag and drop app elements, convert app design into code, create workflows, manage CRUD API calls, integrate 3rd party APIs, write some custom code if needed and download the complete source code of the mobile app.

Here, it is worth mentioning that you still require some basic knowledge of programming language, API and CRUD operations to build low-code no-code healthcare apps.

Well, as the name suggests, a no-code platform facilitates you to build a healthcare app without writing a single line of code. Because of its nature of complete codeless app development, it is majorly used to build basic healthcare apps.

Whereas, a low-code platform is an ideal choice to build a modern and advanced level of healthcare app as it enables developers to write custom code as well.

In other words, working with a low-code platform requires technical skills as it is more focused on developers and making their development tasks easier.

The following is a detailed comparison of no-code and low-code development. 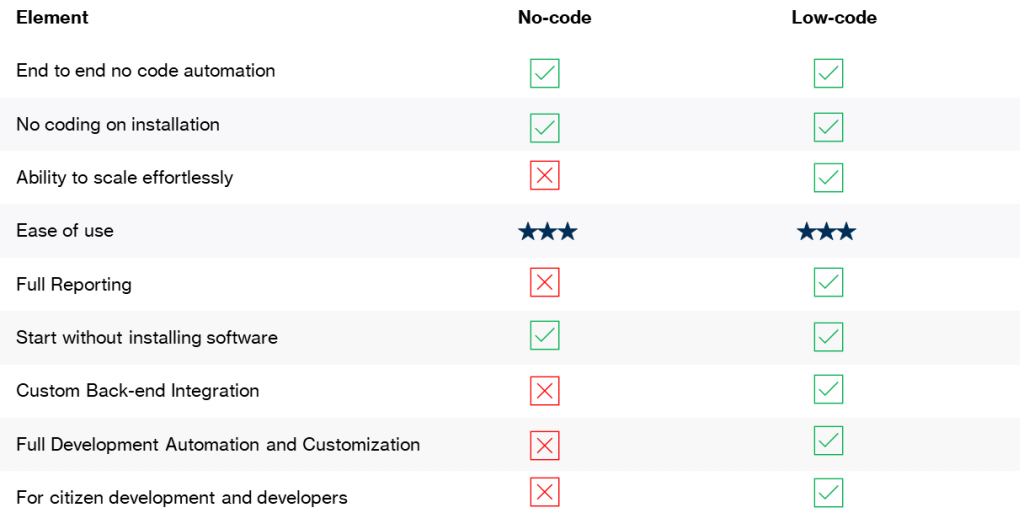 The IT industry has been investing millions of dollars in building low-code no-code development platforms. The value it delivers and the problems it solves are the major driving force.

Custom mobile app development is notorious for its high price. Since building a custom app involves a lot of effort of developers and their expertise, IT companies leave with no choice but to charge high to compensate for what they are investing in.

But no code low code platforms reduce the efforts of the developers which directly results in fewer development hours and so does project cost saving by 50 to 70%.

But with no code low code platforms, developers can build the same level of the app much faster by leveraging the built-in drag & drop functionality and code automation facility.

3. It reduces the code maintenance efforts and cost

Bugs are very common in custom-built mobile apps. In fact, a custom app is more liable to having more severe bugs than an app built with a low-code no-code platform.

Why? Well, in the custom-built app, developers themselves have to write code for every function. But in the case of a low-code no-code app, the app code is produced by an algorithm that is already well-tested for generating code free of bugs.

With no-code platforms, you can easily build a basic level of healthcare apps such as,

But to build type 1 and type 2 healthcare apps, you need to work on a low-code platform as it allows you to add custom code and achieve functionality that no-code platform lacks natively.

Low-code no-code development is still in its early stage. However, it will soon heat up as organizations and startups are preferring low-code no-code apps over custom-built apps due to the value it delivers.

Meaning, you can jump into it by building a healthcare-specific low-code no-code platform.

Well, we have been following no-code/low-code since its inception and we must say, it has the potential to change the healthcare industry.

The problem currently exists in the healthcare industry is lack of enthusiasm when it comes to mobile apps. The top reasons behind it are – as discussed – high cost, tech complexities and maintenance efforts.

There are multiple ways to tackle these challenges – such as MVP apps, cross-platform apps, clean code architecture. But nothing is capable of solving all 3 challenges in the single-shot – except for low-code/no-code development.

However, here it is worth noting that custom app development is still the king. For building a purpose-driven healthcare app that is the first of its kind, only custom development can justify the idea of the app.

Where no-code/low-code healthcare development works best is the clone app or the type of app which has introduced to the market years ago.

In essence, no-code/low-code development has very great potential. But it still cannot be able to replace custom development!

The following are the different use cases of our no-code healthcare software.

Telehealth for Seniors or Nursing Homes in the USA: Acquire the Tech Built By Telehealth Masterminds
App Development
01 Apr 2022 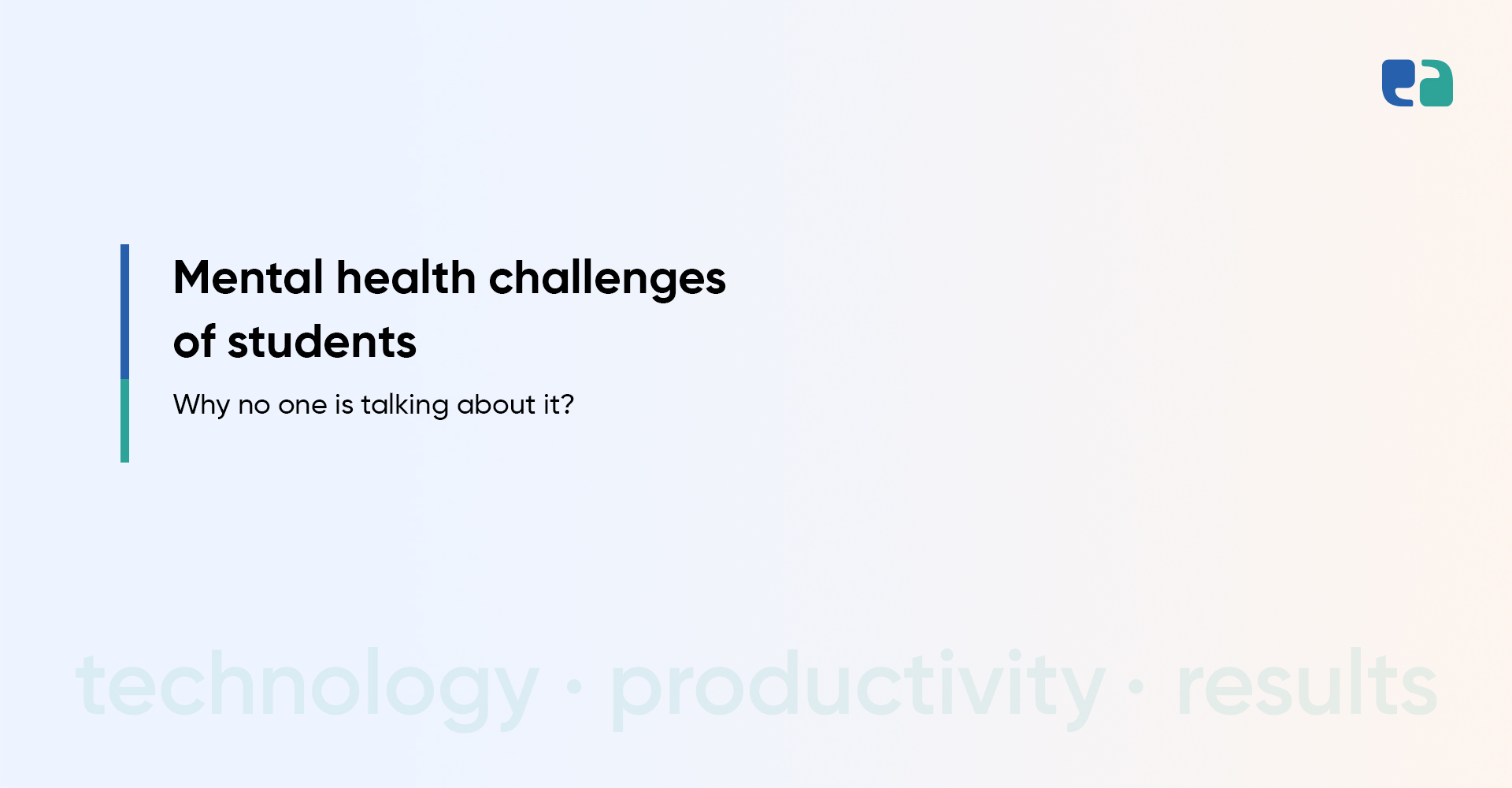